How to teach your child when to use the correct spelling pattern?

by Zahra Nawaz
Teaching your child the right spelling pattern can be challenging. It is especially challenging when you have multiple spelling pattern choices that can be used to spell the same sounds.
Some examples of these tricky spelling pattern choices are:
I have spent hours sifting through blogs and educator forums, searching for ways to differentiate between spellings of homophones, and looking for rules to teach my students that they can quickly apply and make the correct spelling choices.
While rules and tips exist that can teach children most spelling rules (example: when to use spelling patterns ck or k or when to double f, l, s, and z at the end of words) I could not find an easy fix to teach my students who often got their ai, ay, and a-e mixed up.

How Serena learnt to spell right

Serena was a child who bonded with me over the elaborate stories with wacky characters that I made up for her. Being on the spectrum, she loved talking about these characters and imagining them as part of our sessions.
When she progressed to writing vowel team spellings, she struggled to remember spelling patterns like most other children do. We persisted in practice, practice, and more practice for a few weeks but didn't seem to have much progress... that's when I resorted to making up a story for her that used only the focus words with the spelling pattern that we were working on including some of the characters she loved.
The story was an instant hit with Serena. She loved the story and wanted to read the book again and again. I leveraged on her interest and creating board games and flash cards with the focus words to reinforce orthographic mapping of these words. It was fun and didn't seem like a task.
Interestingly, the confusion around using the ai and ay spelling patterns for our focus words with the long sound of ‘a’ /ā/ didn't seem to be a problem anymore. I used the same book and resources (board games/flash cards) with other students of mine and had the same results. I then created a series of stories for all the vowel teams/spelling patterns that my students often had confusion with. I shared these with some OG therapists and have received positive feedback.
I hope the books and the printable resources in the vowel team series work for your students just as they do for mine. 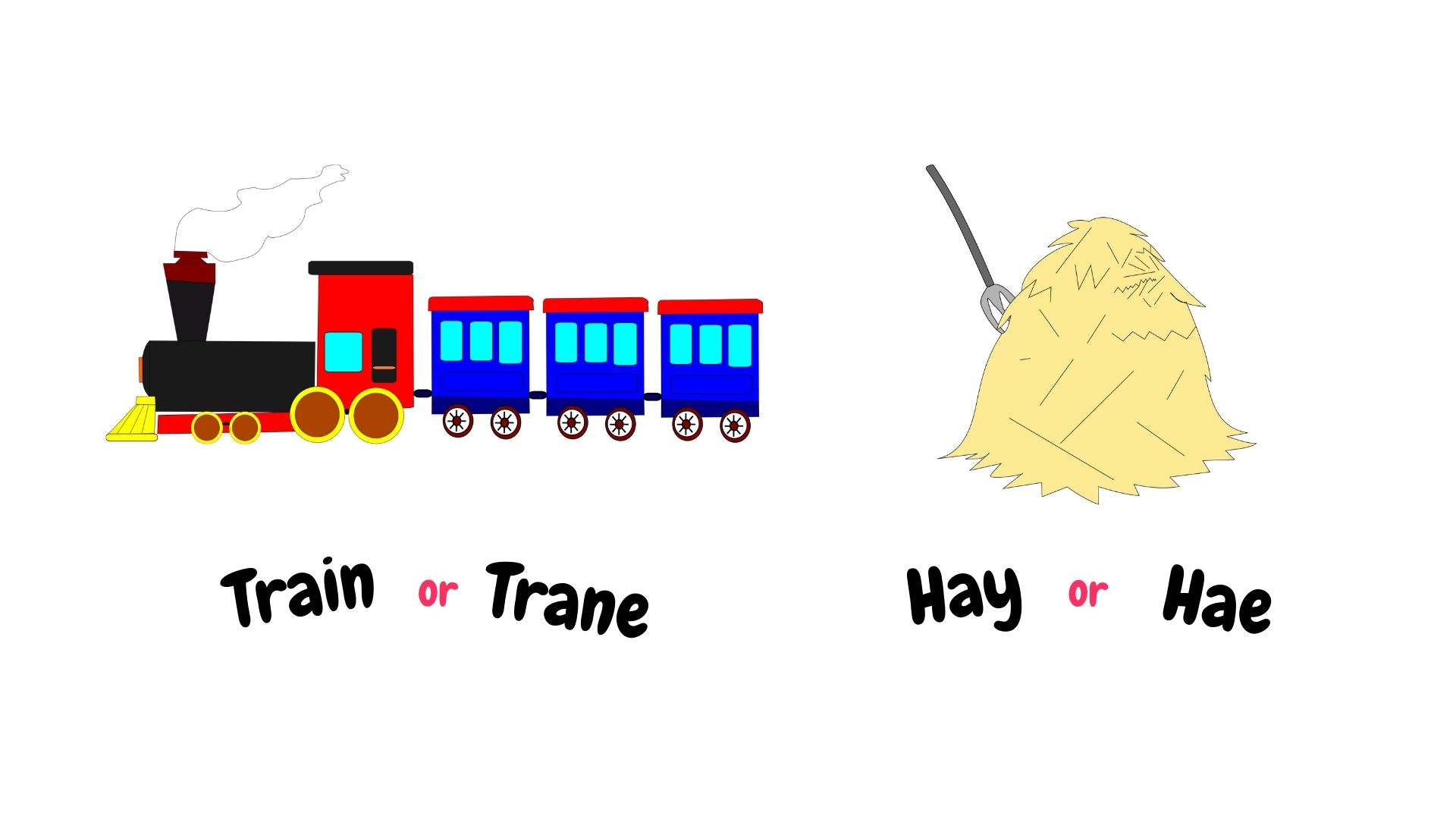 Let’s look at the below set of words:
The above words all have the long sound of ‘a’ /ā/ but are written with different spelling patterns.
In the first vowel team story I created for my student Serena (Train Trip To The Bay), the focus was on the long sound of a /ā/ spelled with the spelling patterns ai and ay. The story covered 83 focus words spelled with ai or ay and did not include any of the other homophones or words with the same /ā/ sound.
We read and reread the story over four weeks and played games like bingo and snake and ladder using those focus words. I found that she was getting better at spelling those focus words as she associated the words with the story.
Every time we had to spell one of those focus words, she would cheerfully tell me, “Zahra, this is from the Fay book, so that’s how I know to spell this with an ai and not a-e.” We made similar stories for every vowel team that I introduced her to, and we have had no trouble remembering spellings for words with similar sounds such as er/ir/ur, oa/oe/ow/o-e, ai/ay/a-e/ea/ei, etc. 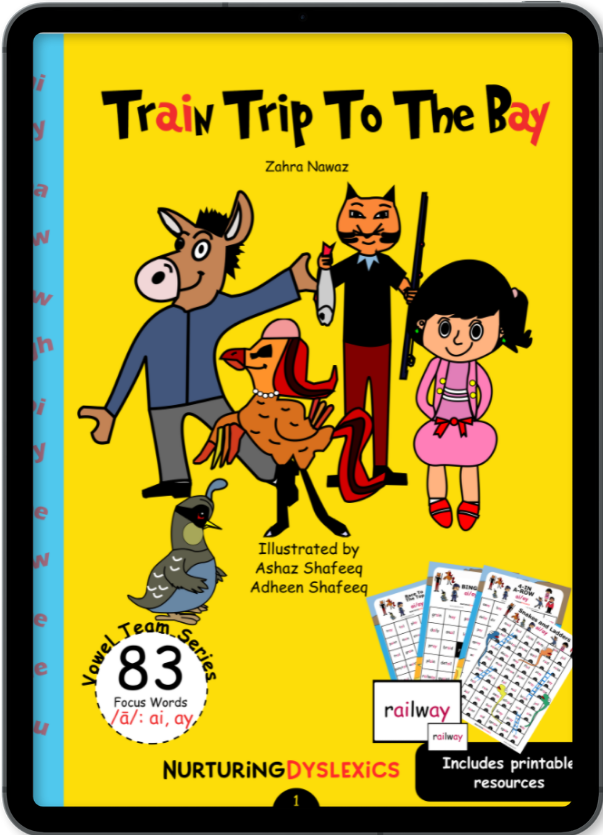 Train Trip To The Bay

Train Trip To The Bay is the story of Fay, a young girl who takes the train to visit her friend, Den the Donkey, for a picnic at the bay. She has a few escapades on her way, but she reaches there safe and has a great day with her friend. 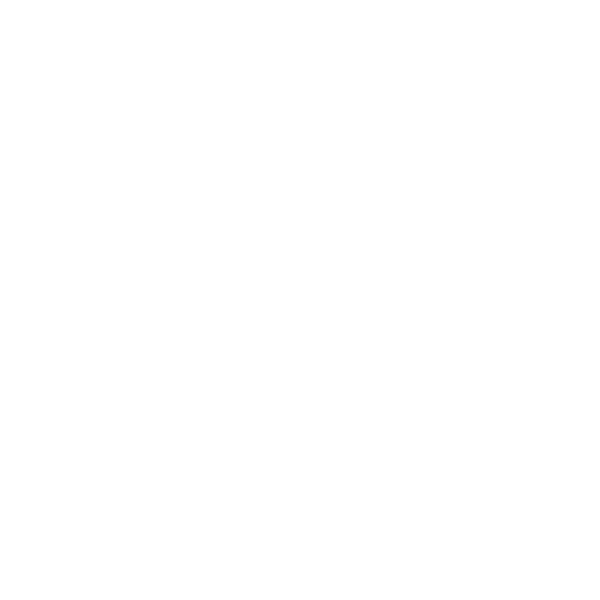 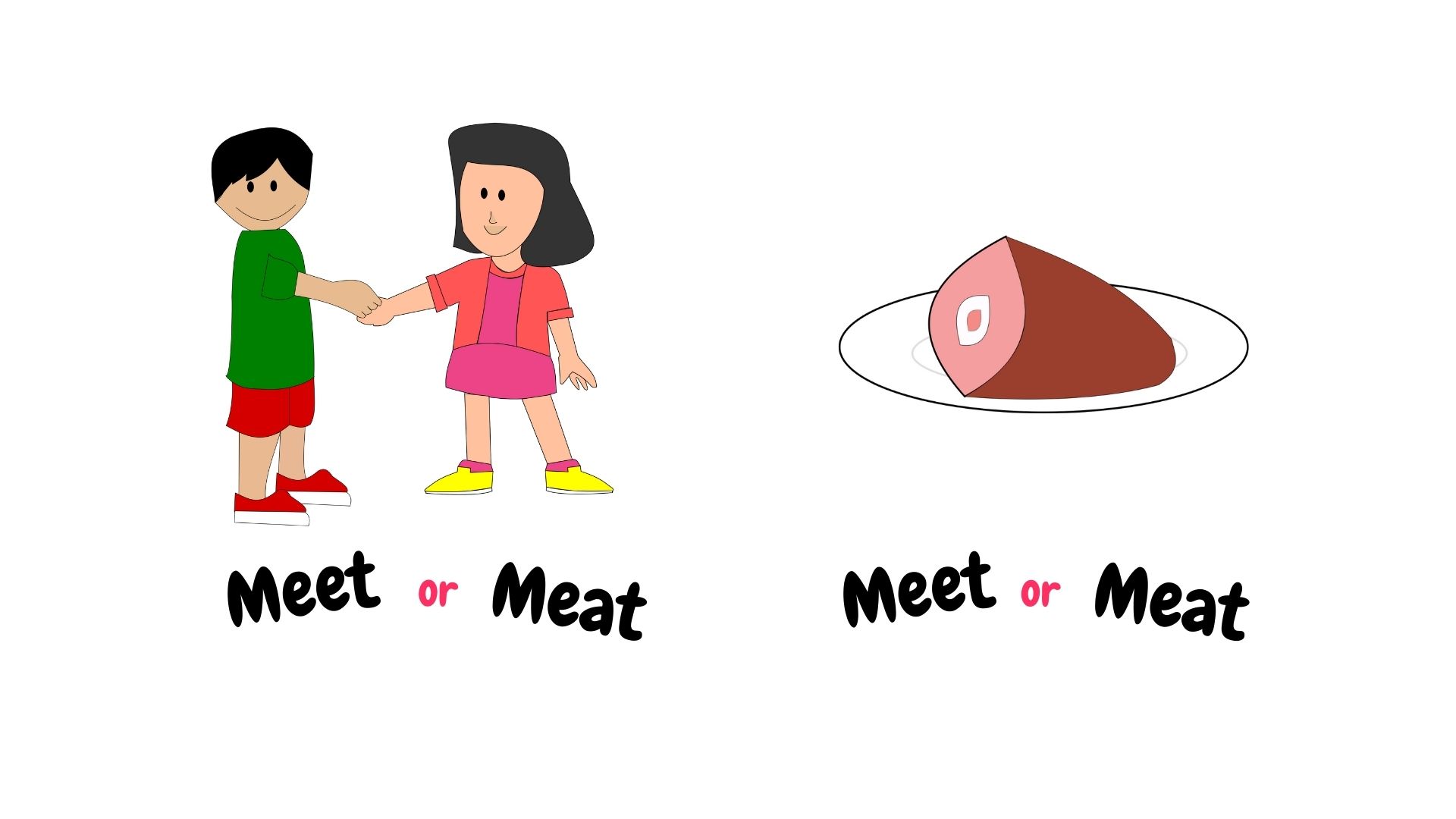 Let’s look at the below set of words:
The above words all have the long sound of ‘e’ /ē/ but are written with different spelling patterns.
The story Teens Go To The Reef can help students in the orthographic mapping of 98 focus words that are spelt with ee spelling pattern. 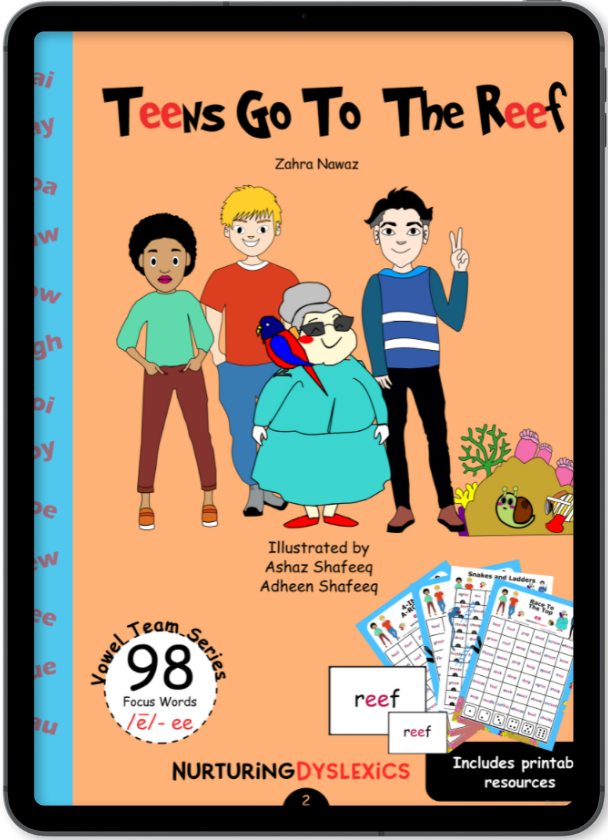 Teens Go To The Reef

Teens Go to The Reef is a story of three teens Ben, Lee, and Pat, who drive to Ben’s Nan’s village over the weekend. They go diving at the Reef, where they are disheartened at the sight of plastic trash everywhere. 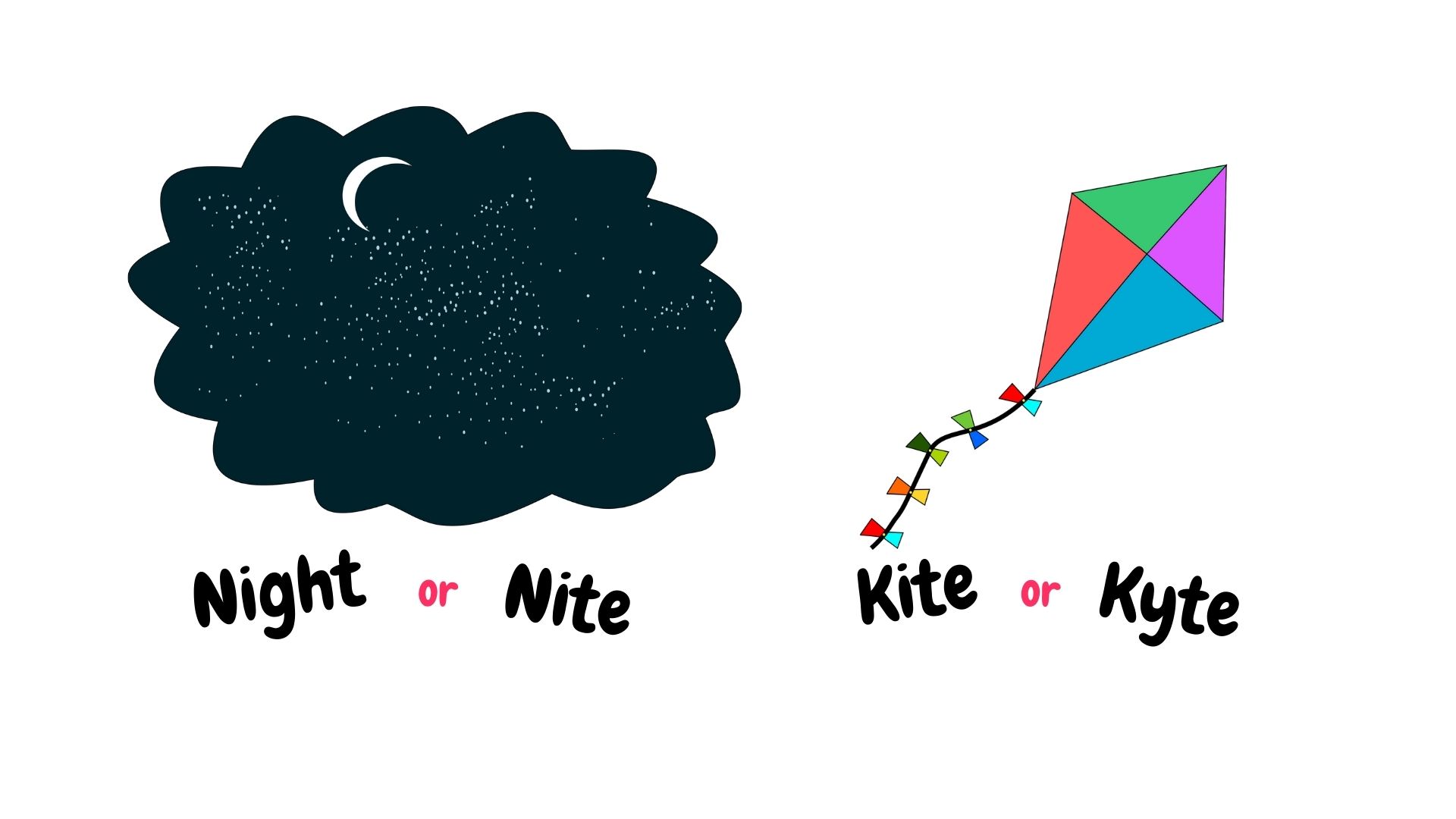 Let’s look at the below set of words:
The above words all make the long sound of ‘i’ /ī/ but are written with different spelling patterns.
The story Fright At Night can help students in the orthographic mapping of 18 focus words that are spelt with igh spelling pattern. 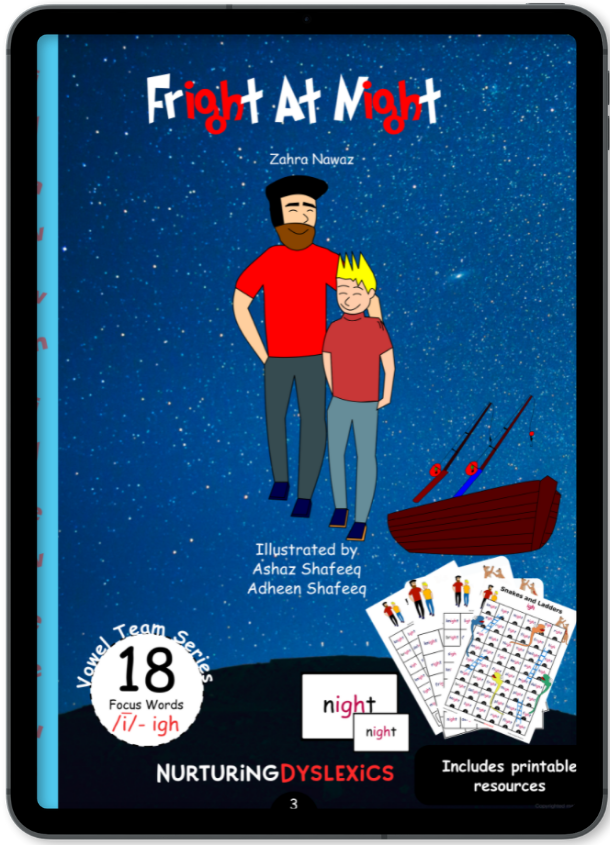 Fright At Night is a story of Jack and his father who go camping. At night, Jack is woken up by a scary noise coming from outside his window. Thankfully his dad manages to chase away the troublesome intruders and all is well again.

How to teach when to use OA and OW (instead of O-E or OE)? 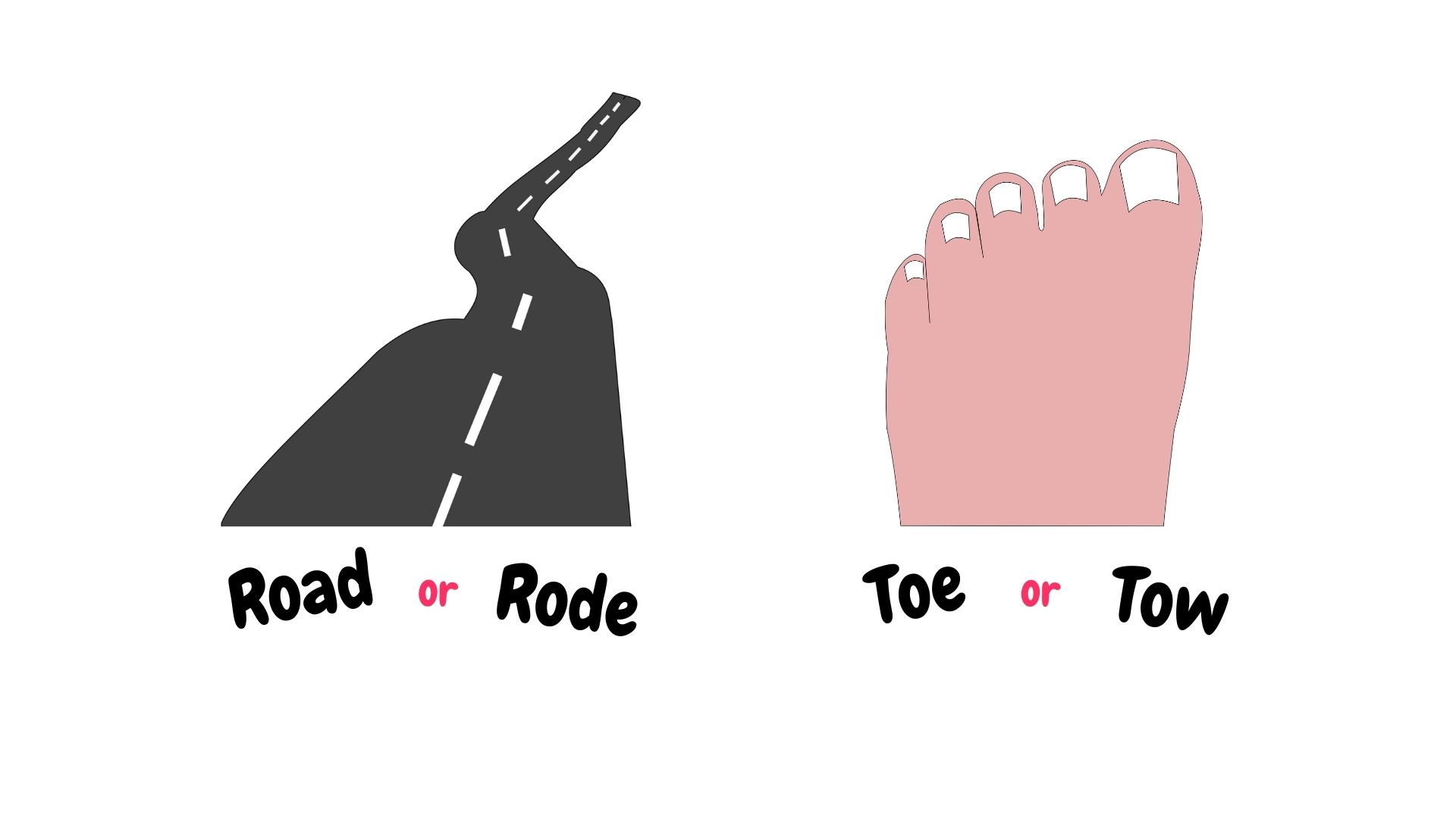 Let’s look at the below set of words:
The above words all have the long sound of ‘o’ /ō/ but are written with different spelling patterns.
The story King Toad and Mr Crow can help students in the orthographic mapping of 77 focus words that are spelt with oa and ow spelling patterns. 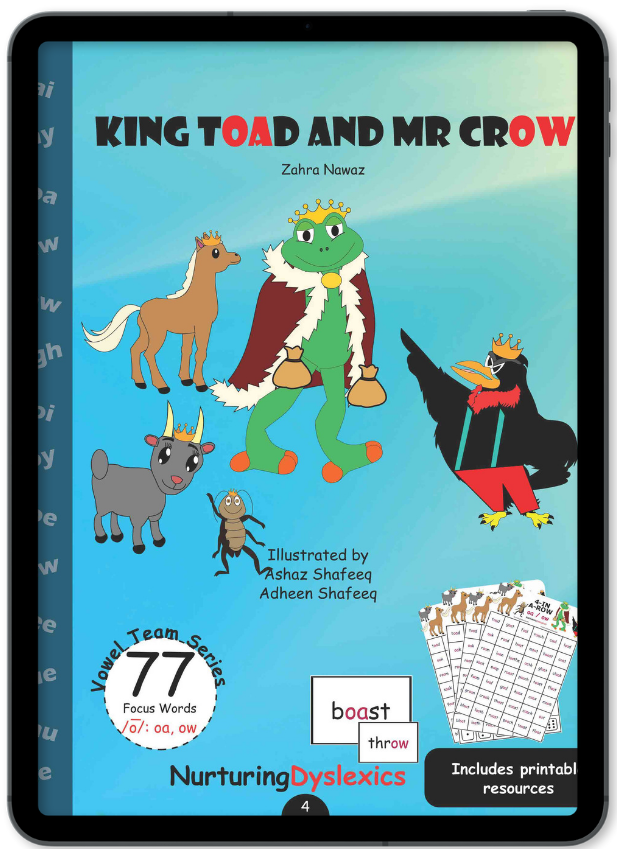 King Toad and Mr Crow is a light hearted story of a kind King and his ministers Mrs Goat, Mr Roach, Master Foal and Mr Crow. King Toad and his people live in a beautiful kingdom where everybody is caring and kind except for Mr Crow who is greedy and selfish. Fed up with Mr Crow's unkind behaviour, the King and his other ministers band up to teach Mr Crow a fitting lesson at the end of the story. 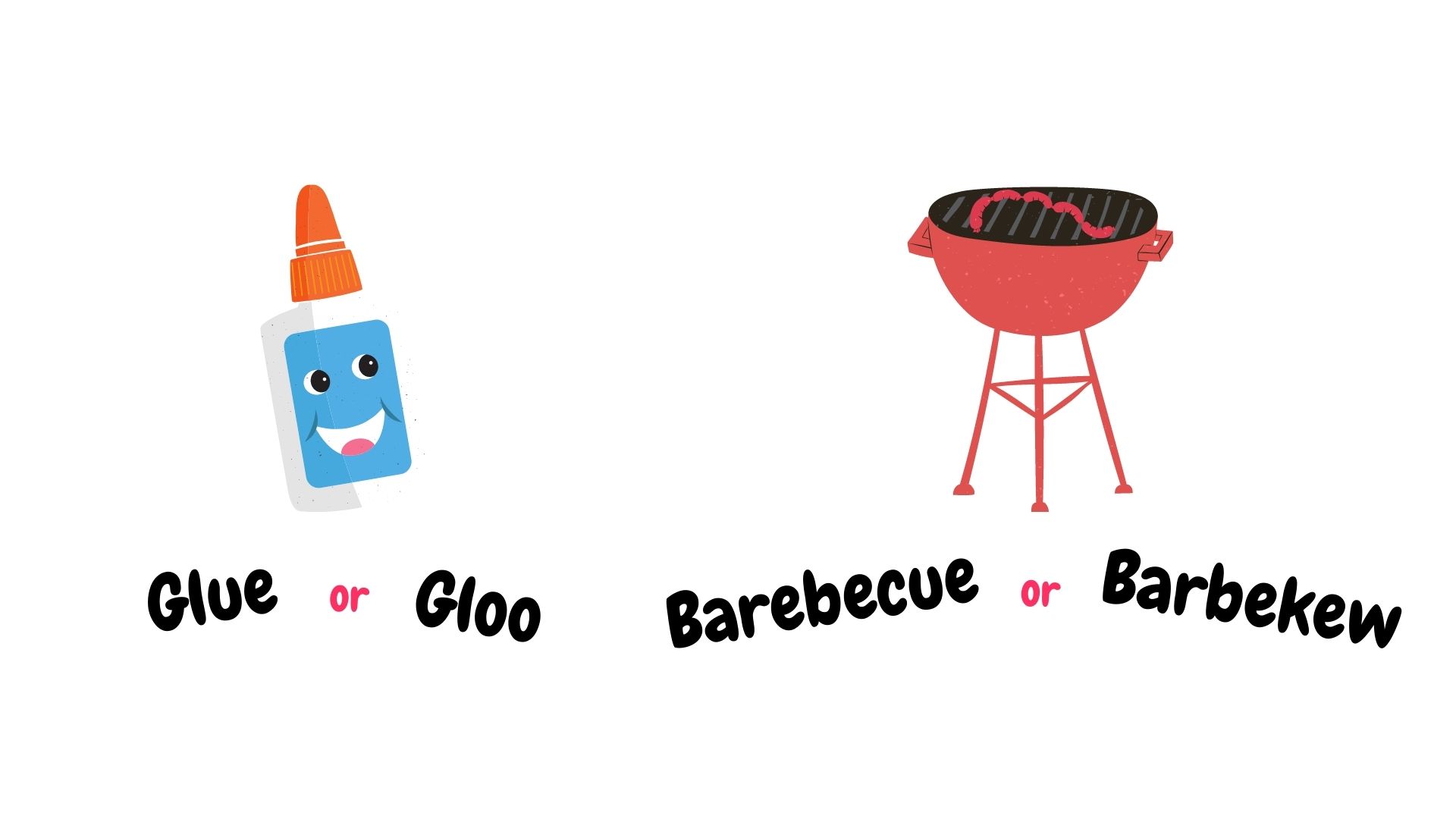 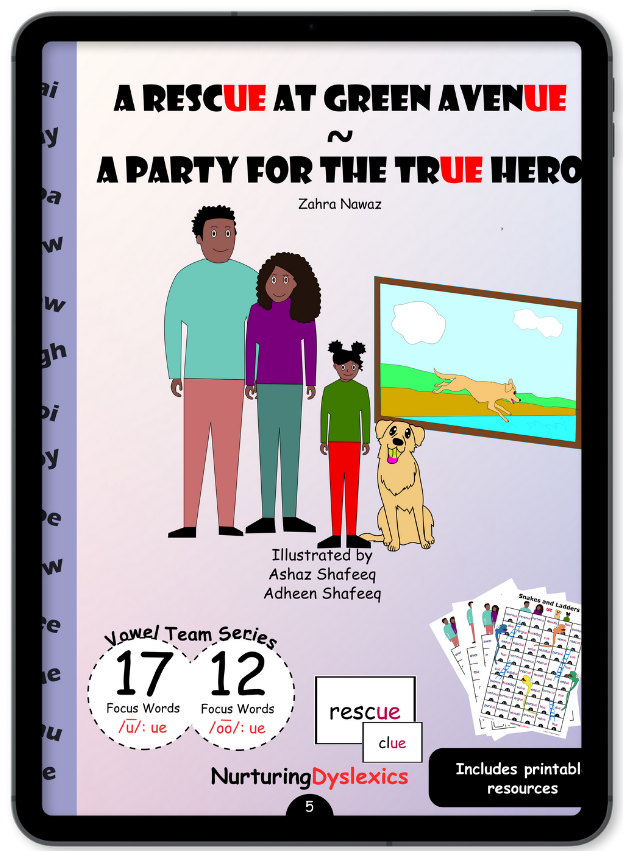 A Rescue at Green Avenue & A Party for the True Hero

How does this work?

The books in the Vowel Team Series have been developed to help children with orthographic mapping of focus words.
Every book in this vowel team series will focus on one or two related vowel teams and will include multiple words that children of school age will potentially come across during reading and spelling.
The intention is for children to associate these focus words with the story line and subsequently become fluent in encoding and decoding those words.
The book is accompanied by resources such as flash cards and board games that can be used in conjunction with this book to aid in the orthographic mapping of these words.
Literacy instruction needs to be explicit and systematic, so each book includes what phonemes, graphemes, rules, affixes, and spelling patterns need to be taught explicitly to the child before they are expected to read the book. Please note that unless all prerequisites have been explicitly taught and the student can read this book independently, it is recommended that you read with or read to the child. 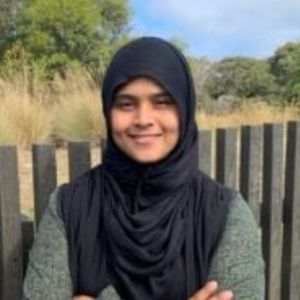 Hello beautiful people! I’m Zahra Nawaz from Melbourne. While I’m not chasing after my boys or cooking up a storm in the kitchen, I work with children with dyslexia and additional needs. I’m an Orton Gillingham trained practitioner registered with the Australian Dyslexia Association.

Train Trip To The Bay 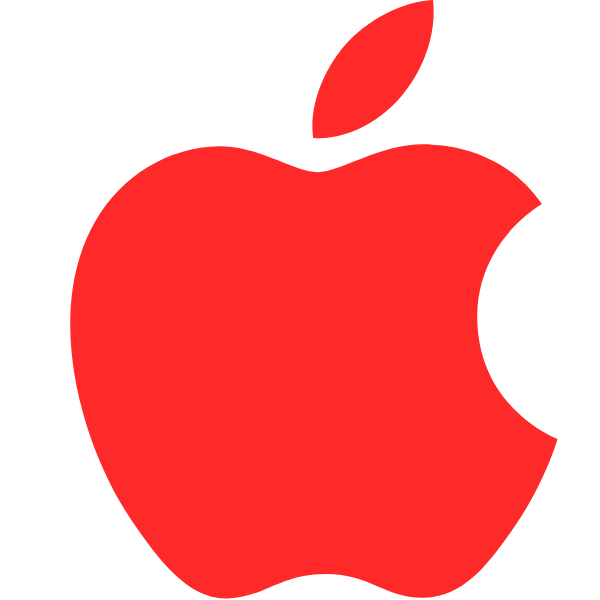 Teens Go To The Reef

A Rescue at Green Avenue & A Party for the True Hero